It has been a while since I last posted anything to the greater world beyond twitter and facebook, and so I am going to share with you some of the work I have been doing since I got back into the UK. {note this post will not cover anything to do with my Canada fun}

So over the past few weeks I have been doing very little but over the past few days I have done something that has been fun and interesting and could have an large impact on the way we navigate around the Mozilla Universe. Lets add some context to this post before I go any further.

During the Summit in Whistler I attended a talk held by one David Boswell on the Mozilla Universe. It was a great talk which I really felt hit some very important points. In 1998 there was only one Mozilla website. It was a nice, tidy, reasonably simple to navigate Mozilla Universe. Now there are literally over a hundred different sites that are all a part of the Mozilla Universe and it is a mess. There is no single unified feel, look, or navigation. This may not be the worst thing in the world, however the navigation is a big thing. We want people to join the community and help out in an area that they are interested in. Our community is so diverse that there is, I believe, something for everyone! They don’t know this though because they can’t find it!

If you need to get around the community to find things out, it is almost as if you have to be part of the community already. This is where the recent map of the Mozilla community came from. 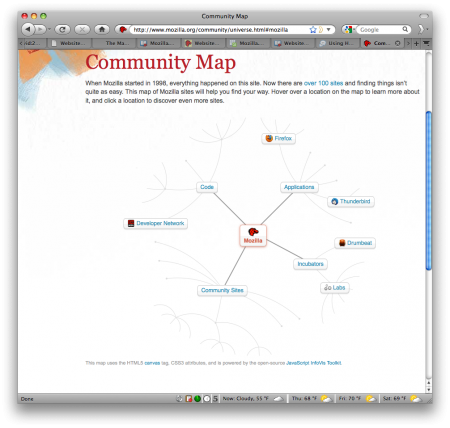 What I have been doing for the past few days is working on a way of taking this existing new resource and making it accessible to any and all Mozilla related sites that want to lay their hands on it. Doing so has taught me a lot about JavaScript and the pain of creating something to work cross-site all over again.

So here is the idea. All Mozilla related sites can use the one, common element, a map, to allow them to design and create however they want. New and potential community members (and maybe even a few old hands too, ) will then have something that the recognise and know how to use, that allows them to explore and discover what a wonderfully rich community we really are!

To top it all off, they don’t need to use any guess work. The map will kindly tell them where they are, and show them.

So… I present to you, the first functional prototype of such a feature, that I call “The Mozilla Universe Widget”.

For the time being it is only a simple drop-down tab/overlay (can also be launched using a link instead of a tab) of the map as it already exists, but with some, unseen modifications to allow it to function and show you your present location. But it is the start of something that can grow to become a useful asset.

I would love your feedback on the idea, as I am sure the rest of the new Mozilla Websites Taskforce would too. Any concept design ideas, or implementation ideas are also welcome.

I have recently thought about how nice it would be to have a custom backed phone. I did after all, buy my phone for many reasons and one of which was the ability to customise it. Another, so that I could help beta test

At last I am home (and have been for a few weeks now) and I have now had time to recover from jet lag as well. Mind and body are now in the same time-zone at last. The month that I have spent in