For the past few months I’ve been having a recurring convocation with Tobbi about a number of issues he’s noticed within Mozilla. Until recently we’d been going round and round in circles, with no end in sight. Recently Tobbi, along with Ricmacas, followed one of my suggestions to resolve the circle problem, and articulated their thoughts/feelings in a blog post, which has started the discussion we should have been having openly for some time now.

This post is my response. It is my opinion, and in some places I might play devil’s advocate. I want to encourage and push this community discussion. It’s a key topic that we should be paying a little more attention to, and with the Mozilla Summit just around the corner, it’s a great way to build into problem solving and trouble shooting at the event.

Before you read this post I urge you to read the post from Tobbi and Ricmacas, “New Community” or “Mozilla Community 2.0”, as this post assumes you have.

Is the hype strategy really the best? Does the community want to be preached new products that it didn’t have a say in?

This is a good question, and one which I think is more complex than it appears at its surface. Mozilla does have a precedence for pushing “product” as it does now. However it has always been done in a more community oriented manner than it appears to be now. We’ve seen things like Spread Firefox, Operation Firefox, and Firefox Flicks, all come in and out of existence. All with the intent of promoting “product”. These initiatives however were organised with a lot of (and in the case of Spread Firefox, almost entirely) community input. The advent of Firefox OS has left this input a little less, noticed, to some degree.

All this being said, I don’t think there is a problem with preaching “product” and hype to these products. Community has had a say, it’s just less clear where, and how much. Something we used to be good at pointing out.

You might notice that I’ve been bolding, and bunny earing the term product. The reason for this is that I think product is the wrong term to describe what is being pushed, though it is a term we keep using. A better term I think would be “user focused output”, though this is still not perfect.

The question I think I’d ask as a replacement for theirs would be: “Is the community’s input being surfaced properly?”

In our opinion, “Product” has no role in being a Mozillian. Only because the Mozilla Corporation decides to push a product forward, doesn’t mean that we volunteers have to.

I love that here Tobbi and Ricmacas have done the same thing as I have in this post, and identified that product is the wrong term. Though I disagree with their thoughts on its role in the mission. My reasoning… its in the mission statement itself.
Our user focused outputs are the reason why Mozilla has a voice in the global space, and thus has had so much success in the past. It broke the monopoly that Microsoft had gained in the browser space, and rejuvenated the market. The browser wars had one key purpose: innovation. This led to the death of the Internet Explorer induced stagnation, and the birth of a much more open web. A more open web we are reaping the benefits of as users.

This is something that I think we sometimes forget, and at other times focus on too much. There is a hard balance between the two that we used to have just right. Lately it’s shifted a little to the side of focusing on market over community, but not too much so. Nothing a little sanity checking won’t fix.

Efforts in streamlining (or as Mozilla likes to call it: aligning) this community are undoubtedly taking place and have taken place the last months…

These efforts should be taking place, and they are not a bad thing. The fact that Tobbi and Ricmacas are seeing this as a problem, for me, is a problem. It means that we’re either not doing this process properly, OR, we’ve allowed ourselves to drift from the mission too much before starting this process, causing resistance and friction to a process that should elevate concerns, not induce them.

Without these kinds of efforts (and this is not the first time these have happened), it’s all too easy for the focus of the community (which is both volunteers and paid staff) to drift away from the mission, and more into the realm of becoming number 1 in the market. Something we do not want to be (as a priority at least). We thrive on being the underdog, and forcing the big players to rethink their approaches to things. This is what made Firefox such a huge success.

…whenever we see proposals to streamline the community, we both feel that we are all being conditioned into ideas and vision of a somewhat new Mozilla that knows what the community needs but doesn’t quite know how to make it happen.

This just reinforces my concern that maybe the way we are going about this alignment is a little wrong. I still don’t think the idea to re-align is a bad one though. It’s critical to our success.

I believe it was Mitchell Baker who used the analogy of running across a ford in a river, to explain how Mozilla runs from time to time, sometimes we might lose our footing a little.

This for me is a good analogy, so I’ll continue it on a little more.

Sometimes we’ll choose a footing that’s just a little too slippery. The benefit of running, though, is that we’ll soon find another, more stable footing. There are downsides too. It’s a lot of work, and if we fall… it could be hard to pick ourselves up again. But we’re Mozilla. We’re committed. We can and will continue on.

…being a Mozillian means pushing the open web forward. And that can be done in a variety of ways.

Rightly so. I don’t think there is a single person at Mozilla that will disagree with this point, and I’m more than glad this is what your feel. However I think here you are raising a different problem (intentionally or not). Is Mozilla now so big, that knowing the vast number of ways we are pushing the open web forward, requires more time and effort than the community at large can afford/manage.

It’s a question I don’t have the answer to. I’ve always found it hard stay on top of everything Mozilla is doing. Reading Planet Mozilla on a daily basis does help, but it eats a lot of time. I’ve personally taken to curating posts from planet that catch my interests and reading them on the train to work.

I don’t feel that it is acceptable to encourage communities and their members to do something they don’t completely see eye to eye with.

To me, encouraging communities is fine. It’s something we have always done. It’s how we get ideas out there, and try to get people to help. It’s common practice in the whole world, not just Mozilla.

Think about any hackathon you’ve ever been to. A large number of them have short pitching sessions to try to get people to join in with a particular project. Session proposals for conferences work in much the same way too. Even BarCamp scheduling has an element of this.

What would be wrong is forcing the issue, or rather, forcing participation. This I don’t see happening. Sure some of our messaging channels get a lot of promotion for particular areas of Mozilla, though there is nothing stopping community members ignoring the topics they’re not interested in.

Perhaps the problem here is that we are not pushing enough of our initiatives, from both paid, and volunteer contributors.

We miss the times of Livechat, because we felt we had a voice that mattered. Was it a huge mess because we all had voice? No, there was a clear vertical management strategy, there were Mozilla employees working there that were our “project leaders”, and the reason I put that in quotes is because these leaders hanged out with us with the humility to listen and consider our ideas, and help us foster them without reservations.

Feeling that your voice is not heard is a major problem, and one that needs to be addressed. I know that the discussions started by Tobbi and Ricmacas’s blog post will help address this for their case, though I can’t help but wonder how many others feel their voice is no longer heard, and how we can change that. Again I don’t have the solution, but knowing there is a problem is the first step to finding one.

As for the “leaders”, I am lucky enough to be in a situation where my managers are more my peers/friends than anything else, so I completely understand your preference to this more horizontal management than the vertical. Unfortunately that doesn’t work in all situations, though I think it could be used in more than it is. mrz has a great post about leadership that I think we can all take a leaf out of.

We always valued diversity. We always embraced our geeky side when volunteering with Mozilla, and we always enjoyed talking about everything Mozilla-related. We knew we were improving the web, and Firefox was the browser with the right values, and the right license!

Mozilla still values the same things. It still has the same mission. Firefox still has the same core values, and the same licensing (as far as I know, just a new version). As for talking about all things Mozilla. I still enjoy it very much, and I know several others that do to. I can’t claim to know everything that’s going on anymore, but I have a reasonably good idea, and enough background to point people in vaguely the right direction.

Yes talking about everything Mozilla is becoming a harder and harder task, but surely that’s a good thing. Surely that proves that we’re working on a lot more than just Firefox.

Tobbi and Ricmacas have raised some very important points in their post, and the timing couldn’t be much better as I see it. We’re in the final run up to the Mozilla Summit where the discussion we start here online, can continue face-to-face, and start focusing more on solutions.

There are some key points/questions that have jumped out at me while reading through their post, as well as some of the comments/discussion so far, and throughout this post I’ve tried to highlight them /bold them.

I’m glad these discussions are now starting to take place on a large-scale, and its thoughts and opinions like these that we need to be hearing more often. It’s all to easy to focus on the good stuff, but sometimes the things that are not perfect are just as, and sometimes more important.

Mozilla needs to go back to its roots a little more, and make sure that its focus across the board is still the mission, the whole mission, and nothing but the mission. 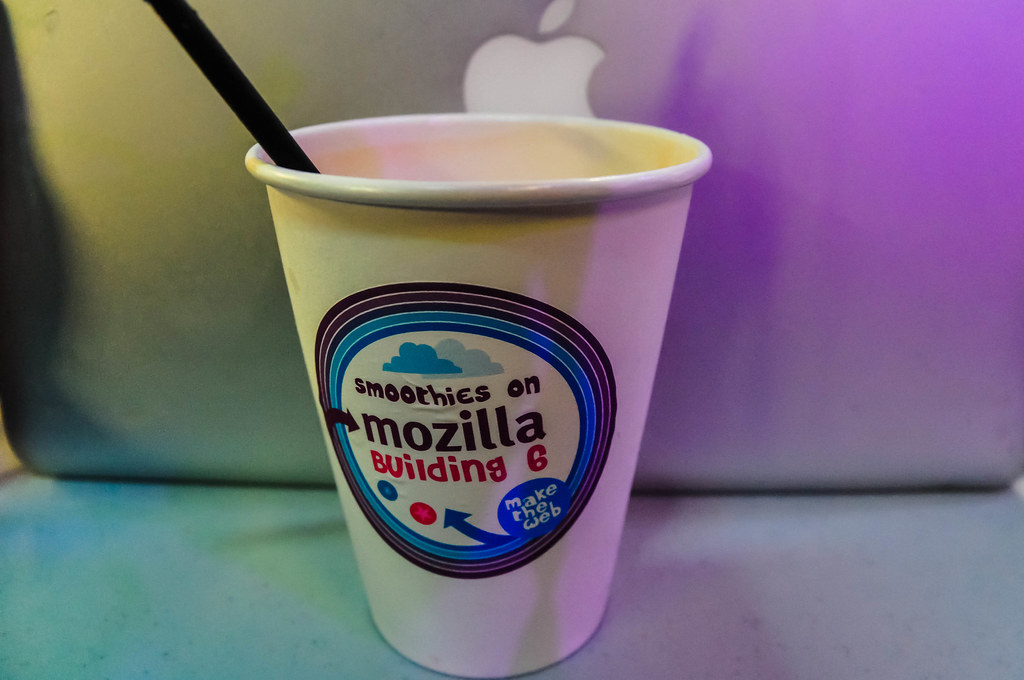 A little over a week ago I was lucky enough to help #maketheweb at Campus Party, in the O2. Campus Party, for those that don’t know, is a week

Time/task management is something that can take a while to develop as a skill… however it can be assisted, with great results, provided you find a system that works well for you. This is an explanation of the system that I've found works