FOSDEM, now over 2 weeks ago, was the third event I have been to with the Mozilla Community. Each of these events have been different and had their own little quirks. MozCampEu09 was about nothing other than Mozilla related projects. The Mozilla UK Firefox 5th anniversary was, well… a party not a conference. FOSDEM however is a completely different story. It was a conference / social gathering with, as they say it on their own site, gathers “5000+ geeks”.

FOSDEM like MozCampEu09, is something that is difficult to describe, there is nothing more… invigorating, than meeting up with a large number of people, many of whom you do not know, that all share a common interest. 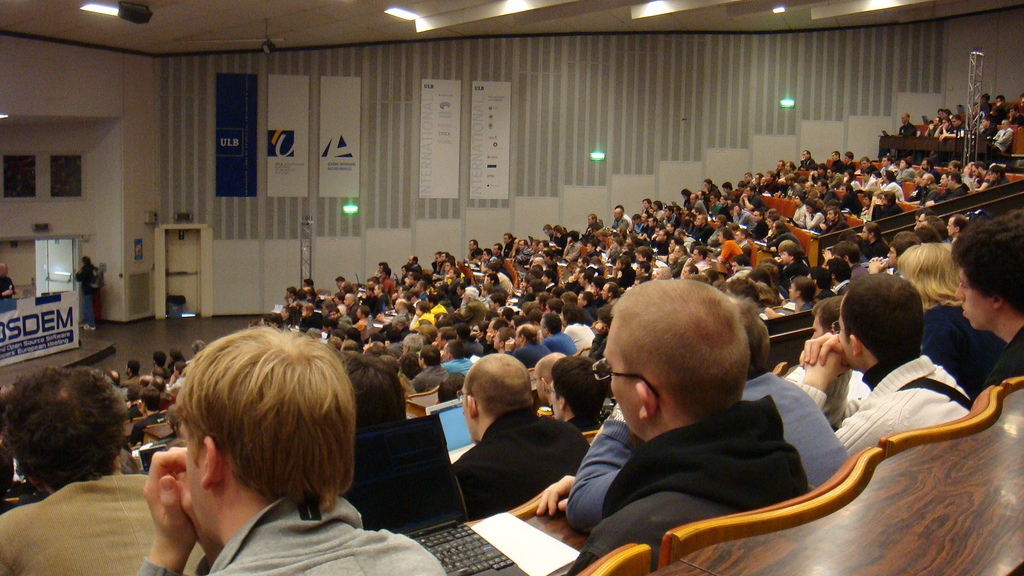 I spent a large amount of my time in the Mozilla Dev Room and on the Mozilla Booth while I was at the event, and I have the format for both is completely different to what I expected, and it was nice. The whole thing was a lot more relaxed than I anticipated which in turn, made me more relaxed. There were a few times when things got a little more hectic such as lunch and trying to get into the Dev Room for the HTML5 talk (which I eventually gave up on due to the queue going all the way down the corridor) and at lunch times while at the booth.

Not only was the whole thing a lot more relaxed but there was a lot to talk about, even for someone who has less knowledge on the actual technological side of things at the moment (what with being a student still and not a master like some who were there).

The trip to Brussels was quick, so quick that by the time I had eaten my in flight snack and turned on my laptop it was time to turn it off for landing. I also noticed a certain Mitchell Baker on my flight as well as another Mozillian who’s name I am afraid to say I have forgotten (I suck at names) and we sat down on the train together and had a chat about where Mozilla is and what its competition is like. 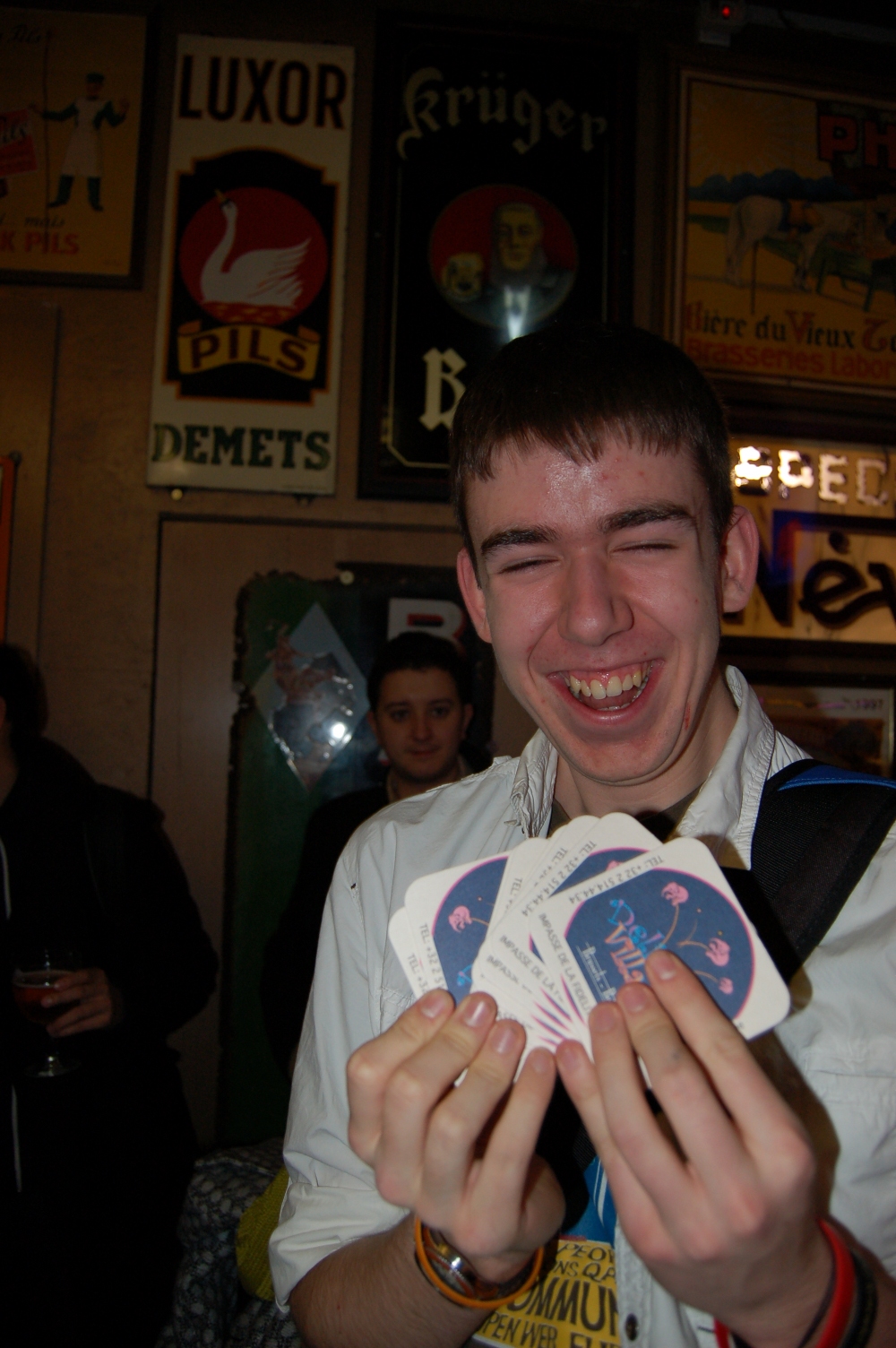 From the train station it was a 3 minute walk to the hotel and after sorting out which room I was in I headed for the hotel bar where I meat a couple of guys from the Facebook development team and we had a short chat about their new HIP-HOP product. Which cleared a few things up for me.

Later that evening I meat some old friends from MozCampEu09 and then we headed for the Delirium Café! There was more in the way of conversation, there was some drinking, and on the whole a very, very, very crowded bar and street. It was while here that I meat a few more MozCampEu09 friends as well as some new people as well as met a man named David Baker who just so happened to be doing a piece on Mozilla and the open source community for Wired Magazine UK.

An early start and quick breakfast with lots of coffee to wake me up and I was on my way to the Mozilla Drumbeat meeting. We discussed how to explain what Drumbeat is as well as how to summarize it in a single sentence, which turned out to be quite hard. We also spoke about a few of the currently proposed Drumbeats and what changes we would make to improve them.

From Drumbeat straight to the main event. There were many interesting talks, and, as I have said, there was also a lot of interesting people and some time spent on the booth.

Late afternoon there was a small issue with my laptop where it died. Well, wubi died and I had to ask the guys on the Ubuntu booth if they could help me recover the lost course work. They were very helpful and I had Ubuntu reinstalled by the end of the night ( around 3am :/ ). It did however push me the final step to completely installing Ubuntu properly in its own partition and since then, I have not had the slightest issue with it. Not even a crash of my own doing 😄

Just like in Prague, I got my hands dirty and did some organizing, I missed the starters for dinner, but the main meal was nice. I even managed (unwittingly) to have 2 portions of pudding. Then onto Laser Tag in which my team won, and overflowed the score counter. The red team (the one I was on) is actually 1357! 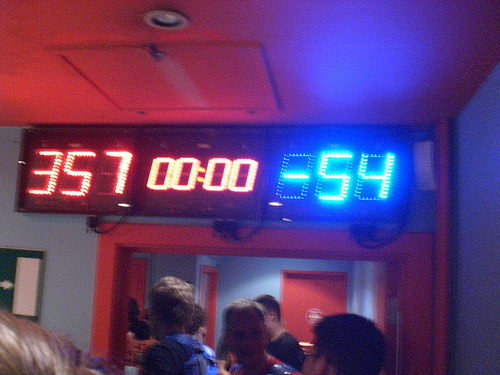 There was some bowling, then another game of Laser Tag, but this time on the blue team and we instantly realised why the blue team lost every game that night, the blue team equipment did not work properly. Never mind…

A day similar to Saturday but with different talks, as well as a lightning talk from myself and my room-mate for the event Gorjan Jovanovski. I was also interviewed by David (the man I met at the beer event the night before) so keep your eyes peeled for that in the next issue of Wired UK.

The final part of the event was to say my goodbyes and head off to the airport, this was not as simple as it sounded as, for some unknown reason, the train that I was told to get by the ticket master, went not to the airport but out of Brussels in completely the wrong direction, this meant that when I did finally get to the airport I had to literally RUN to make it to the plane before it left. I had already missed check-in! I did make it though so on the whole not a bad day.

That concludes my post of the event, short, sweet and to the point, if you can find one that is 😜

First off, it is important to clarify what a web browser is, and it is summed up beautifully by the Open To Choice website. The Web browser is the lens through which we look at the virtual world, and the medium by which we

Procrastination from Johnny Kelly on Vimeo. I think, infact I know, I procrastinate, more than a little too much. However, after watching this video I know that I have the right to. Aside I know it has been a little while since FOSDEM ended