Okay so this is post 1 of many where I will be giving you large chunks of the documentation for the Affero project. They build nicely into posts due to the way that the documentation has been written so to be kind on your feed reader and myself, I will give you a daily project update OR documentation extract till I either run out of extracts, or decide that I don’t have anything worth posting about

So without anymore pausing for time, here is the project overview (the official one) and explanation of the current systems Affero is designed to compliment/semi-replace.

[Please note that is not an official Mozilla project any might no be implemented on completion. It is an experiment that helps with my coursework for my A-Level studies.]

Mozilla are currently looking for a new way to help people get involved with the community and other aspects of the Mozilla eco-system. They currently have several different systems in place for encouraging, and helping people getting involved. They include things such as: direct contact with people via face to face conversations with existing Mozilla community members/employees; a mailing list for people to send enquiries to and a dedicated group of people volunteering time to respond; a multitude of IRC channels on irc.mozilla.org; the list goes on.

What Mozilla want is a system that will allow for the vast majority of these to be centralized and monitored for trends in enquiries, when they are made, and where they are coming from.

As previously mentioned there are several methods that Mozilla are using to encourage, and help people to get involved. Bellow each method will be detailed as well as some of its pros and cons. This section can not only be seen as providing information on the current systems in use by Mozilla, but also as problem definitions for each method. A generalised problem definition that gets right to the heart of the issue will follow.

This system is fairly self explanatory. Members of the Mozilla community, as well as Mozilla’s own employees will often recommend Mozilla products to people, however they will also talk about the other projects that Mozilla runs, and how they benefit people. This provides the listeners with information about areas of Mozilla that they could be involved with, and, when asked, the Mozilla representative will usually either know enough about how people can get involved or know someone who can provide this information, or even direct the user to one of the other systems Mozilla uses to help people get involved.

There is also a contribution mailing list where a team of volunteers accept enquiries about how to get involved with the community. It has an email address as well as a form on the main Mozilla.org website on the “Get Involved” page that allows ease of submission to this list.

Mozilla has a large number of IRC channels as well as afore mentioned methods of communication between the end users and their volunteers. There are a number of channels on their IRC servers which people can join to get involved. 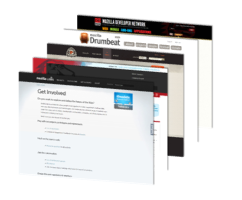 Mozilla has tried to solve this problem using get involved pages on multiple different sites as well. These pages aggregate information on how people can get involved with the project or a specific area of the project, and then provide a way for people to get in contact with someone about getting involved if desired.

Generalized Problem definition Mozilla is a large project with a great selection of ways to get involved, however the information on this selection is scattered across the 100+ Mozilla websites. For someone wanting to get involved, finding out what contribution options are available, as

This past week and a bit, well… the past month has flown by. I cannot believe it is almost February and that tomorrow I have my final mid year exam (wish me luck). Anyhow, thought as I am trying to keep this blog more